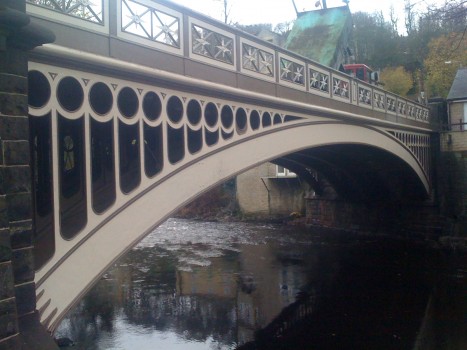 The project:
Boy Bridge is a cast iron single span structure, that carries Station Road over the River Calder, at Luddendenfoot in West Yorkshire. The bridge was constructed in 1882 and has since become a point of interest within the community. A scheme was designed by Mouchel for Calderdale MBC for repainting Boy Bridge and undertaking associated repairs in order to preserve the structural ironwork & restore the bridges appearance to its former glory.

The solution:
The main contract was awarded to APA Concrete Repairs Ltd and involved the installation of counter weighted scaffolding platforms suspended from the bridge deck and extending under the bridge, to access the ironwork. The project was delivered in two phases because of loading implications and to allow the flow of traffic over the bridge during the construction phase. All works were completed safely, within the expected programme and with minimal disruption to the local residents.